Join us in celebrating the life of Gary Coleman on Thursday, November 3rd from 2:00pm-5:00pm at History Club of Los Gatos. 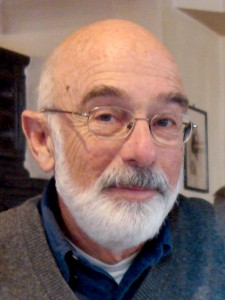 My Dad was always great with words, something I’m really appreciating as I start to sort through letters and cards he wrote to me and the family over the years. He was funny, smart, creative, and full of love for his family and friends. Also, considerate and aware of areas where his loved ones might struggle; like in the writing of an obituary for him. That is the spirit in which he wrote his own obit a few months ago. Well, that and probably the fear that we’d screw it up.

Here follows the obituary he wrote:

I decided that I was probably the person best suited to write an obituary for myself, and that before death was the best time to get started.

My family roots run deep in Northern California. My great grandfather Antonio Caprini was the first green grocer in Vallejo. Both of my parents graduated from Berkeley High. I was born in 1937 in a hospital in Albany, CA and began life in a small rented bungalow in Oakland’s “South Berkeley” region. My father died when I was 9, and my mother began her life as an employed person working as a bookkeeper for Berkeley Farms, a company located in Emeryville, not Berkeley. She met there a wonderful milkman, Peter Guyette, who would give us our first owned home. It was in Walnut Creek.

I attended and graduated without honors from Las Lomas High School, and directly after graduation, I satisfied my nation’s desire for me to spend time in the US Navy. Two years later I went to college, graduating in four years (with no debt), earning a BA in English from San Jose State.

Following a pretty bad year of being a clueless first-year teacher of high school English and Journalism, I looked to get out of town, and found a dream job. The Department of State hired me to deliver top secret pouches to American diplomatic outposts all across Africa, the Middle East, and both East and West Europe.

In Paris, I was accepted into the most prestigious Ecole des Beaux Arts after presenting a painting done in my first weeks there.

Also in my first weeks, I met the beautiful Karoline from the German Alps. We fell in love, and she would become my wife forever. We had two much loved children, Robin and Gregory. These three are the people who will dearly miss me. Others,  with whom I shared happy times, may think of me now and then.

After my three glorious years in Europe, I returned to California and to teaching. On my second time around, I had more to offer, and I think that I became a very good educator. I spent two of my years at the International School of Brussels, and most of the rest of my 30 years at Leland High School where I was a counselor and teacher of English and History. It was a fine career. I never went to work doubting that what I was doing was important.

In 1998, I retired from teaching. I had more time for cycling and tennis and travel. The travel was inspired by Karoline who loves the world. We did a couple good trips a year. Lots of Europe, driving some roads too small for comfort, some too fast to keep up. She opened my eyes to some places about which I asked, “Why would I want to go there?”  She never took me anywhere that I didn’t end up loving. Karoline broadened my life, and I hope that I did the same for hers.

Retirement also allowed me to return to creating art. I had some success with painting. To take a look at what I produced, log into: gary-coleman.artistwebsites.com.

I do not expect to see any of you in another life. I am going to a quiet region marked by a total lack of sensory stimulation. My life has not been influenced by religious teachings. I behaved “morally” because that seemed the right thing to do. More than for any accomplishment, I hope that I will be remembered for being a decent person.

In lieu of flowers, contributions in memory of Gary can be made to Martha’s Kitchen in San Jose. Contact robin@robincolemandesign.com with any questions.