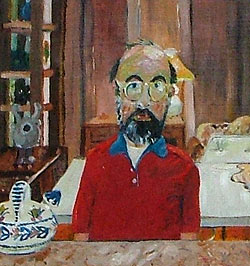 Gary Coleman’s art career had a long gestation period, its academic inception going back to grade school where his preoccupation with drawing contributed to his earning a second try at first grade. He would not feel comfortable calling himself an artist until many years later, after his retirement from thirty years of teaching high school English and history.

Gary minored in art and majored in English at San Jose State University, with the intention of becoming a suffering writer. Upon earning his BA, he entered a field with, he would soon discover, far more potential for suffering. He started teaching. He admits that his first year was a disaster. Following that year, he delivered milk to the homes of his students’ families and their neighbors, but he also learned of a dream job.

In 1964, he applied for and got a position with the Department of State Diplomatic Courier Service to be stationed in Frankfurt, Germany. He accompanied top secret materials to virtually every capital city in Europe, Africa and the Middle East. Whereas teaching offered very little time to paint, the courier job made it available, there often being a week or two of free time between trips. It also opened opportunities to see great accomplishments in art in amazing museums and galleries. He treated himself to an on location study of art history and appreciation.

After 2 ½ years of living the Cold War and witnessing Africa’s bloody emergence from colonialism, Mr. Coleman headed off to Paris where he was accepted into the prestigious Beaux Arts to study drawing and painting. This period in Paris would become especially important to his life, as he would meet the woman who would become his wife.

Karoline, from the German Alps, and Gary, married since 1968, live today in San Jose, CA, and have two grown children.

Gary retired from teaching in San Jose (and for two years in Brussels, Belgium) in 1998. At first he was preoccupied with the idea of producing a body of work that could be recognized as his own, but as he painted more, he found, to his relief, that he was just becoming Gary Coleman naturally. His rolling California hills and other landscapes that thrive on inspired use of color over a superstructure of well thought out composition are now recognized by many art lovers in his South Bay Area environment.

While he continues to experiment with color and composition, he does so within his own artistic skin. Skin allows for expansion.

In 2001 he had a one man show entitled “The Artist as Landscape” at the Pacific Art League in Palo Alto. Praised for both its use of humor and its artistic merit, the show was comprised of paintings depicting what the artist saw of his self without the use of reflective technology.

For one three-month period in 2004, he was the featured artist for the Palo Alto First Friday Art Walks, and until recently was represented by the now defunct Sobi Gallery in Burlingame. Gary is currently a member of Allied Artists West, a professional art group in the Bay Area.